Dad and I had just finished feeding the various herds yesterday (the cows are divided into at least 6 different fields of various sizes – and the horses are in another) when he got a text from Dev saying there was a heifer having trouble, and we’d most likely have to pull the calf. It’s one of those farming realities that makes your stomach drop just a little. You can’t help but worry as you remember the cow that prolapsed; and the one that died after an emergency cesarean due to infection; the one that couldn’t get up after. There’s always the chance the calf will die before you get it out or be pulled too hard, injuring it in the process. Through picking a smaller bull for first timers we slim down the possibility of pulling – but it’s never a sure thing, especially with heifers.

There’s also adrenaline – the rolling up your sleeves sense of purpose – here is a chance to do something useful, to help the labouring cow, to make a difference, to win out over the death that surely would have happened without your presence. 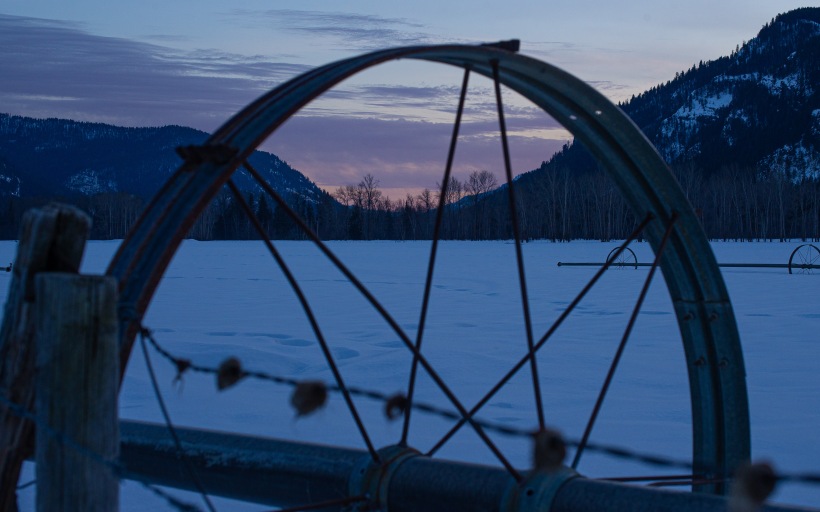 So off we went, the sky turning deep blue with twilight, everything quieting for sleep as we approached Grandpa’s big red barn (I’ll never look at that barn without thinking of Grandpa) where the lights gleamed out across the snow and the herd in warm welcome. Some of my sharpest memories of Grandpa are in the middle of the night bent over a cow and her calf, his hat with ear flaps snug around his ears.

Becky was already there of course, going about shuffling the moms and babies to make room for the new ones in her quiet, efficient calm. She’s learned from Grandpa and then dad that quiet is best and calm is even better. When I watch her work with the cows I always think I’d want her as my nurse if I had to have one. She’s quiet, but the cows know she means business, and she doesn’t have to yell to prove it. When Beck’s there, she exudes competence – a sense that everything is going to be okay no matter what crisis might come. She won’t like me saying so – but its something you observe from slightly outside the circle – the generations of teaching that makes things instinctive.

The poor, young mom was off in the corner of the field, she’d been in labour all afternoon, but even so she was stubborn about going in the barn – and it took all three of us to head her in the right direction – a few quick dashes and spin abouts along the way as she tried to get around us. 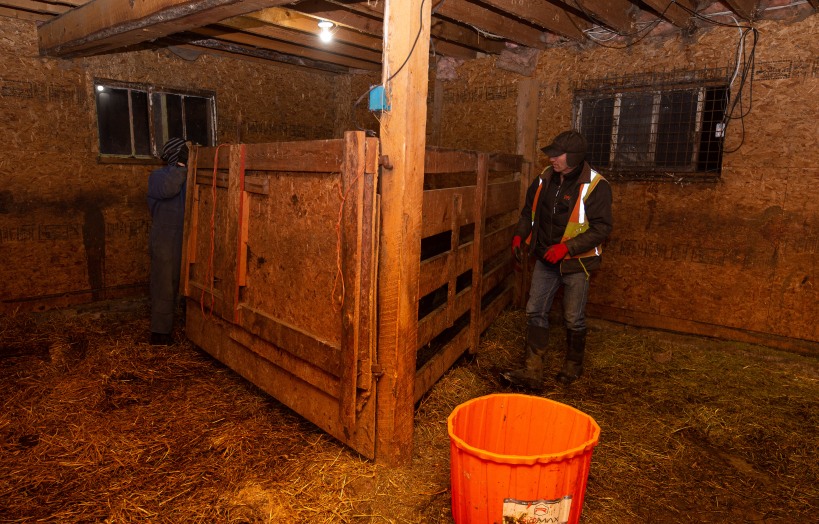 Once we had her in the barn, it was quick work to get her in the corner between gates, everyone’s voice lowered while I clicked away to catch Dev and Dad in the moment, pulling with the cow’s contractions, working steadily to get the calf out, trying to balance the force of pulling with the urgency. 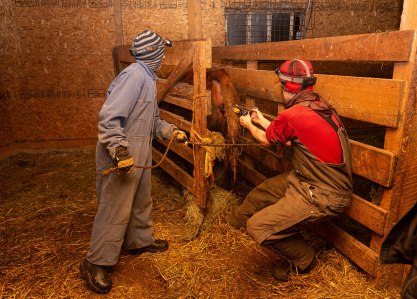 There’s a moment where the mom goes down, she just can’t keep her feet under her any longer, where you have to be careful not to get in the way and not to let her get injured by the gate. Then there’s the long seconds of intensity where everything is quiet except the mom’s grunts, followed by the liquid arrival of the calf, its body totally limp and still for a few seconds while its bewildered little lungs start working. 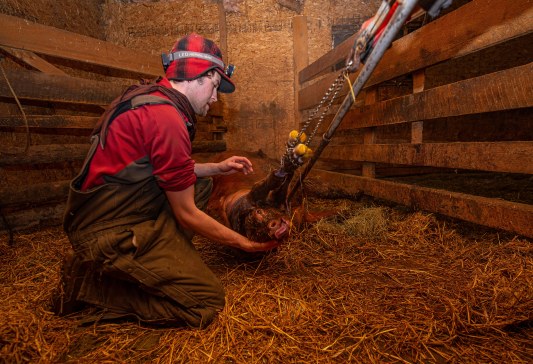 But even after the calf’s arrived there’s still a sense of concern – and we watch closely to see if its been injured, if its breathing. Also importantly, it needs to be taken to its mother’s nose fairly quickly, (after a hard pull she’s still down) so she can smell herself on it.

We have another mom in another corral who won’t accept her baby, who kicks at it and doesn’t recognize its smell. We suspect because she had such a hard pull and took such a long time to recover that she didn’t smell it quickly enough and her protective instincts never got a chance to kick in.

This pull wasn’t as bad as it could have been, and everyone gives a sigh of relief when the mom moos at it, gets up and cleans it off, nudging it with affection, and Dev slips in to give the calf a little medication to help it get on its feet.

Every day a calf survives is a good day – and already the fields are full of fun. 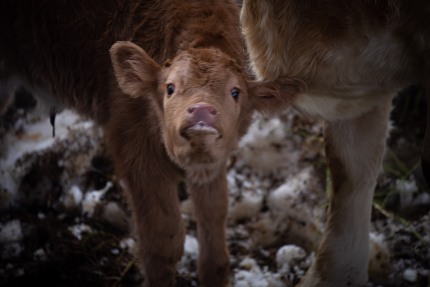